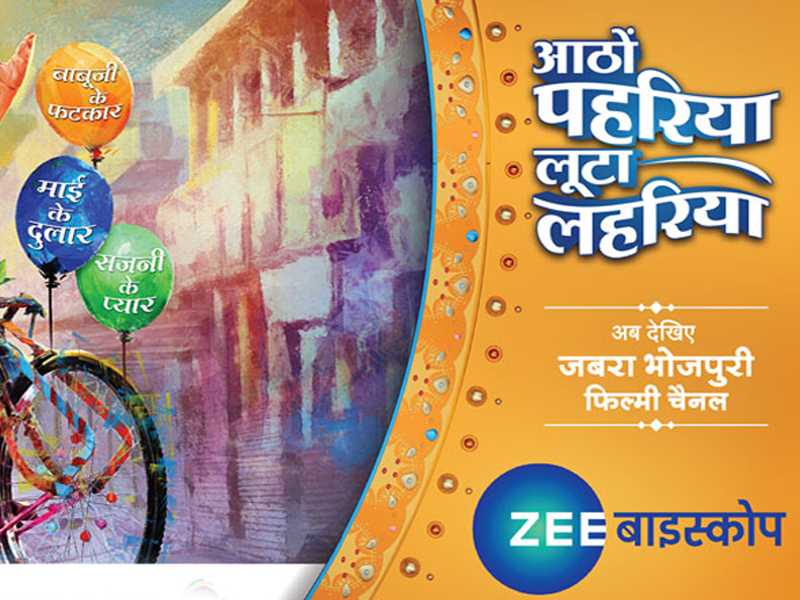 Brief:
Zee Biskope is the new Bhojpuri movie channel launched on 14th Jan 2020. The channel stands as the home for Bhojpuri blockbuster movies and top heroes in the category

Objective:
The objective of the social media campaign was establishing the asli Bhojpuriyat- essence of Bhojpuri films in their true essence and cultural nuances through the Brand’s proposition- Aatho Pahariya Loota Lahariya

Building the content revolving around the brand proposition along with the inclusion of top 3 brand ambassadors- Khesarilal, Pawan Singh and Nirahua

Challenge:
With the presence of other Bhojpuri movie channels in the market, the challenge was to establish Zee Biskope as ‘The Place’ for Blockbuster Bhojpuri films where people are guaranteed to be entertained 24*7

Solution:
The social media campaign was divided into pre-launch and launch

The pre-launch focused on hooking our audience with the top-3 face on Zee Biskope brand as the Brand ambassadors and routing around the proposition of ‘Aathon Pahariya Loota Leheriya’. We chose to take audiences’ love for cinema & the Bhojpuri superstars and worked around the content building. The brand was also launched on neo-social apps viz. Sharechat and Helo

Content creation using memes: Using the expressions and cuts from the movies and creating the excitement around the launch of Bhojpuri film channel

Countdown posts: Using scenes from movies for a certain number of times

Cross over videos: We merged our brand song with the movie clippings

This/That: Here we showcased the channel is for everyone by putting copies like: ” भजन करे वाला के टाइम होखे, या मनोरंजन करे वाला के”. We used the clippings from the movies to achieve the visual representation

The launch phase solely focused on the tagline- Aatho Pahariya Loota Leheriya. For this, we took digital gamification route- Aath Pahar Aath Khel. On the launch day, the brand’s social media page was gamified for 24 hrs, where we held 8 different gamified activities, with 3 hr interval between each game.

The announcement of start and end of the game was achieved with the brand ambassadors. Also, some of the games were curated with the help of actor support as well.

Guess the movie based on the emoji

Guess the song based on word

Conclusion:
With the celebration of the asli bhojpuriyat and entertainment 24*7, Zee Biskope ranked 1st in the Bhojpuri channel category during the launch week itself.